When she was young, she met with her parents for dinner. Her father surprised her with a small statue of a wolf. The evening was interrupted by Revenant, whose target was her father, a wanted conman. As he slaughtered everyone there to make his way to him, Loba was transported to safety, but not before witnessing the events. This includes looking upon her father’s body. She was raised by a new family but had an eye for quality and the life of theft called to her. Everything changed when she broke into a supposedly impenetrable facility and got her hands on the Jump Drive tech stored inside. With her new teleportation bracelet, the most secure and unattainable items were within her reach.

Rumors spread across the Outlands: if you wanted something valuable -and well guarded- Loba’s who you go to. She was almost able to put her past behind her. But when Revenant joined the Games, her past catapulted into her future. Desperate to find a way to kill him, she sabotaged a facility full of Revenant bodies, bringing Skull Town and Thunderdome crashing down in the process. However, she learned it was just one of many such factories hidden across the Frontier. Now, she’s joined the Games to find a way to end him for good. It doesn’t hurt that the Arenas are brimming with treasures just waiting to be plucked. Revenge will come, if fortune favors her. In the meantime, some shiny things have caught her eye.

Nearby epic and legendary loot can be seen through walls. Range is equal to that of Black Market Boutique

Place a portable device that allows you to teleport nearby loot to your inventory. Each legend, friendly or hostile, can take up to two items. 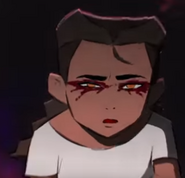 Add a photo to this gallery
Retrieved from "https://apex-legends-universe.fandom.com/wiki/Loba_Andrade?oldid=624"
Community content is available under CC-BY-SA unless otherwise noted.